Hey all! Just wanted to alert you to a fantastic promotion Barnes and Noble is running from now until November 2nd. It’s called “Fall in Love” (get it?) and during this time both BLISS and LAST CHANCE LLAMA RANCH are only $1.99 on B&N’s Nook ebook reader. Here are the links!

Click here to get LAST CHANCE LLAMA RANCH on your Nook!

I’m delighted to announce that Barnes and Noble gave me a wonderful opportunity to guest-post on their official blog, B&N Reads. Here’s what they had to say about LAST CHANCE LLAMA RANCH and my little essay.

“Hilary Fields’ rollicking new novel, Last Chance Llama Ranch, is the story of Merry Manning, an Olympic hopeful who is forced to completely change careers after a life-altering accident. Told with a fresh and shockingly funny voice, it is filled with endearing characters and set in a very unusual locale. Fields, no stranger to enormous life changes herself, shares her story of a writing career filled with stops and starts, triumphs, and hard lessons.”

The topic is Writing, Resilience, and Reinvention, and you can check out the full post here.

One of the things non-writers often don’t get about being a writer is that, for most of us, there’s no big book tour. Publisher’s Clearinghouse doesn’t show up on your porch with balloons and a brass band on pub day. Unless you throw one yourself, there’s probably not going to be a launch party, if you’re a little, starting-out author like me. Friends ask, “OMG, how was the big day?!” and I want so badly to meet their expectations and tell them there was hullabaloo, the angels sang, and Stephen King blurbed my book.

Instead, I went to my local Barnes and Noble and hunted around until I found my novel in the stacks, beamed and did a modest little dance, signed all five copies and waved farewell to the indulgent counter clerk who probably sees writers like me several times a week.

I went home and refreshed my Amazon sales rank eleventy trillion times. It didn’t tell me much. I tweeted (which I suck at). I beat my Facebook friends and page subscribers over the head ad nauseum with the news that, hey, LAST CHANCE LLAMA RANCH is available! I beamed in delight when friends who’d ordered copies in advance posted pics of themselves with the book. (See below!)  And I had a very pleasant dinner with a friend at the South Street Seaport before heading to bed.

So, how is LCLR selling? I won’t hear any news for probably a week or two. All I can do is hope it’s charming the heck out of folks who come across it in stores, and that I’ll be lucky enough to garner some positive reviews on Goodreads, Amazon, and beyond. Any way you slice it, I’m lucky to do what I do. But there are times I think I’d rather be an actor, so at the end of a “performance” I’d be able to look out over my audience and see how they enjoyed my efforts.

Applause? Crickets chirping? In any case, it’s on to the next project for me as I hope this one lands gently in your hearts. Thanks for your support, friends! 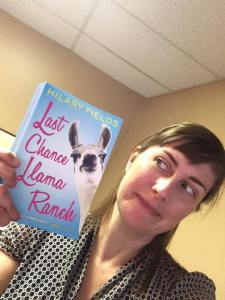 Eyeing it with dubious delight

Now that’s how you show it off! 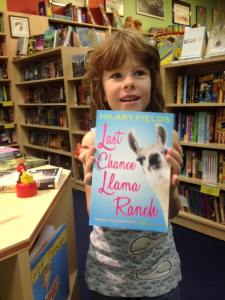 The littlest of fans 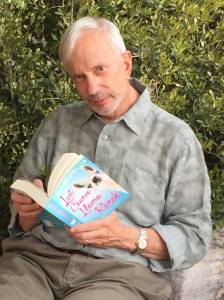 Sorry I’ve been quiet for a few days… Thanksgiving was quite a distraction, between cooking and snooping around various bookstores to see how & where they’d displayed my baby BLISS. Happy to say I saw it on the New Arrivals table at a few Barnes & Noble stores (between Dolly Parton and a guide to dogs, whee?). Anyhow, thought I’d share some BLISS-ful faces. Feel free to submit a picture of yourself with a copy and I’ll post it!

Miss Jenn gets her BLISS on

A dear and supportive friend.

Me, freezing in my parka!

It matches the drapes!

Even in chilly Canada!

Two is always better than one

The award for fastest reader goes to…

He brought his mom… and his daughter!